How Do All ;-)
Short & Cranky! nothing to do with my height or my attitude, well maybe the latter is close enough to the truth.
What I am talking about is bicycle cranks, and in the laid back world, for some people shorter is better, but to save me spouting a bunch of crap about the in's and out's of it all, read this article here on the BHPC website written by Mike Burrows, "The Worlds Most Famous (And Irreverent) Cycle Designer" at least that's what his book says anyway ;-)
http://www.bhpc.org.uk/short-and-sweet-a-discussion-on-crank-length-by-mike-burrows.aspx

For me it was the possibility of having to stop cycling all together due to the severe pain I was suffering in my knees; from years of abuse in the mountains, carpet fitting, and mashing back and forth to work every day on my bike.
After joining the laid back crowd I heard about using short cranks and the possible benefits for not only your knees, but a potential improvement in performance also.
So I managed to get hold of Mike and sent a set of cranks off to him to be shortened.
I have been riding with 170mm cranks and when mike said I'll do them at 140mm for you, so I went with his advice. After refitting them to my bike and resetting the bottom bracket to my leg length I was off.
It took me a little while to get used to them but once I got my head around dropping a gear and spinning at a much higher cadence than I was used to, I started to notice that there was less pressure on my knees and little to no pain, another bonus was that now riding like this, spinning and not mashing anymore I was actually finding an improvement in my average speed and much less muscle fatigue afterwards.
When racing my cadence runs anywhere between 125 rpm and 135 rpm, and even up to and over 150 when heading for the line!

I have since had a couple of sets of cranks shortened by Mike, but me being me I had to give it a go myself, not to save money, as time wise it is cheaper to let Mike do it for you! but because I like to try and do everything myself.
So I set out and using an old crank to do a test on; I made up a very simple jig which held the crank and the correct level and drilled, tapped and faced my first crank arm. 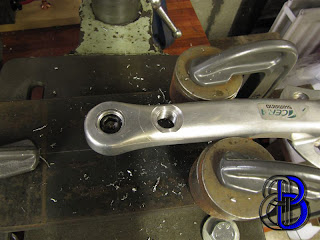 Here is the first test piece, drilled, tapped and faced for the pedal flange. 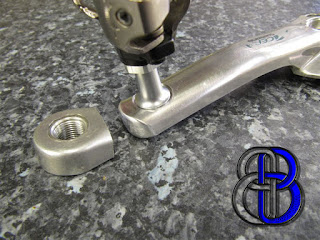 I then cut the offending crank end, and reshaped and polished the new end with a nice radius. 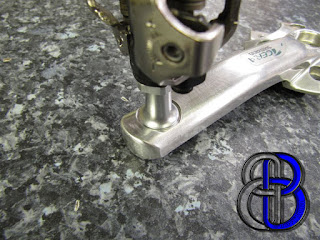 The pedal flange sits nicely in the newly faced end. Just a shame the partner to this crank ended up on a rope machine, it would have made quite a nice set otherwise. 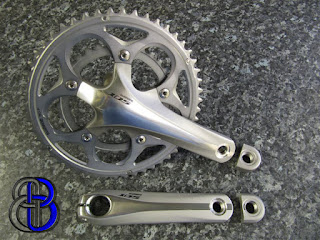 After the success with the trial crank arm, I decide to go all out and try my hand at a new Shimano Hollowtech 105 Compact crankset for my race bike to replace the triple set I had on there, which Mike also shortened for me. 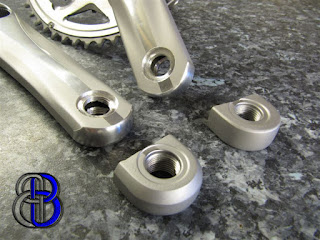 Here you can see the hollow sections inside the cranks, some people say that the Hollowtech cranks can't be shortened, but after doing over 4000 miles on the first set Mike shortened for me, I guess you could say that statement is BS. 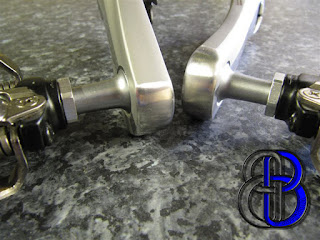 I shortened this set from 170mm down to 140mm and there is still plenty of meat for the pedal threads to get hold of. 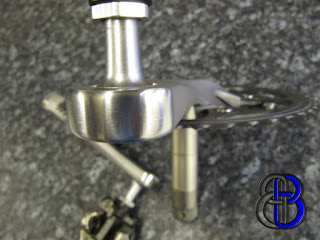 After cutting the old ends off I made a nice radius to the new ends on a belt sander and then polished them up a little with some wet and dry paper. 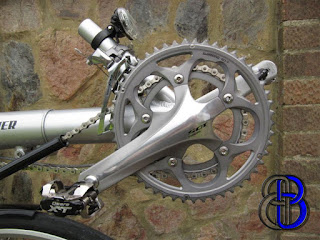 Here is the new set on my race/training bike. 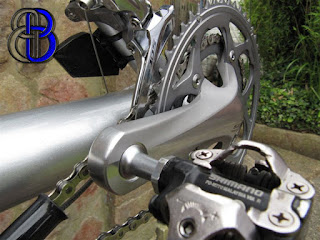 I have done a few hundred miles on these now and they are perfect! in my opinion anyway. and after racing with them last weekend I am totally happy that they can stand up to anything I can throw at them. 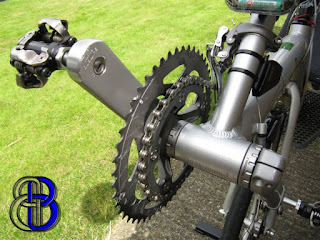 If you have never tried using short cranks before I can highly recommend giving them a go, but you need to give them a fair trial as they do take a few weeks to get accustomed to.

Hi do you have any contact details for Mike burrows please. I really need some cranks shortening due to an injury. Thanks in advance.

please email me your details at, knotty dot bear at gmail dot com (change the dot to . and at to @)
I will email you Mike's contact details asap.

I hope you recover swiftly!