Here is another selection of tools I use for net making, Including Netting Needles, a Needle Winder and a Netting Stand Click on the pictures to see them full size.

Netting Needles or Shuttles.
OK, I admit it; I have a Netting Needle fetish ;-)
Here is a selction of the needles I have in my collection, all are manufactured from various plastics. Sorry to all the wood purists out there that like to make their own; maybe next time I will have some wood needles to show.
By the way if you have never made a wood needle for yourself, I can highly recommend doing it, you will learn a lot by making your own; and there is nothing quite like making an piece of netting with the tools  that you have also made. 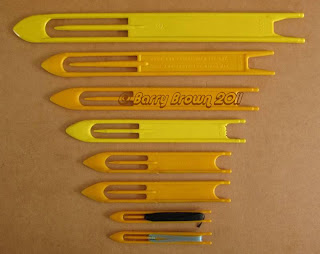 A well known passage molded on one of the needles pictured above, though what the words have to do with net making is beyond me, obviously designed by a knot tyer that could not think of something netting related to have molded into the needle ;-) I like it non the less though.

Norwegian Netting Needles, from Norway just incase you were wondering.
These are my favorite needles, made from Acetal, an engineering plastic; which is very strong and hard wearing, I have many sizes of these varying from 6.5mm wide x 100mm long, up to 32mm wide x 310mm long. the largest of which I use for my Hammocks and normally have 30 of them filled and ready for action to make each hammock body.
I do keep a large stock of these needles for sale; but they are not cheap. 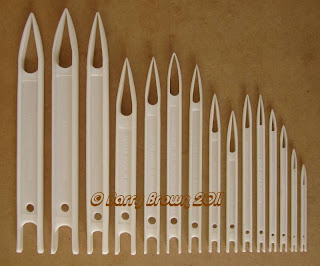 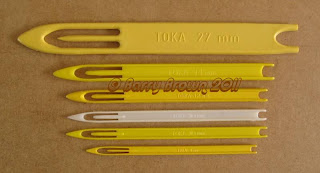 Some more molded Nylon needles, I don't like these much as they have a short body section so don't hold very much twine, these needles are in 5, 6, 7, 8 and 10 inch lengths. 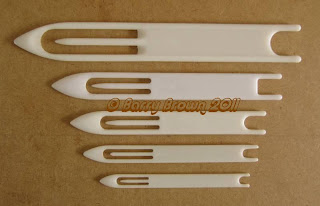 Glass reinforced Nylon? needles from Loomis, U.S.A. same pattern as the Norwegian needles but in my opinion they are not nearly as nicely made.

Some basic plastic needles in 6, 8 and 10 inch lengths, the plastic is a little more flexible than Nylon but the design of these needle is very well thought out; having a long tongue which touches the top of the opening; they will not spill twine when dropped, and they also hold a fair amount of twine, and I prefer these to the Nylon types.
I use these needles for workshops and teaching, and also keep a fair stock of them for sale.

Some small Nylon needles which I bought at a knot tying meeting; I only bought them because I could not find anything else I wanted; and hated having to go away empty handed.
These are 6" long and the body is slimmed down allowing a larger amount of twine to be wound on the needle without bulking out too much. 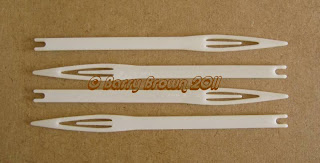 These plated steel needles are used for very fine decorative and Guipure netting, these particular needles are cheaply made and tend to have burs or plating defects which can catch on the twine being used, you can buy good reproduction brass copies of this type of needle but they are fairly pricey, I am not really into doing this type of netting, but the finished articles can be very beautiful indeed. 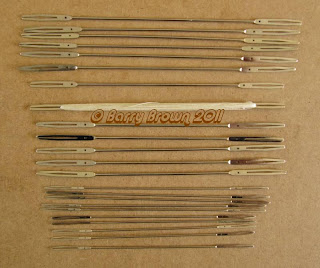 You can never have too many needles, OK so maybe I have a few more than I really need, but when making any piece of netting; I may have up to 25 or 30 needles filled and ready to use, there is nothing I hate more than having a needle run out of twine when I am going at full steam, and having to start winding another needle full of twine, better to have enough wound up before starting on your project. 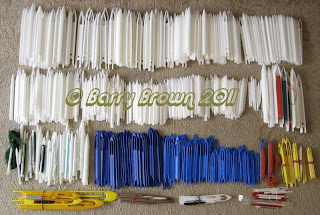 My; now not so Top Secret Weapon! and before anyone asks, I can not make you one; sorry, I no longer have access to the tools and materials to do this sort of work now.
The device will only work with Norwegian style needles that have a "H" or "I" beam type cross section.
I can fill any size of needle I have in seconds, and winding up many needles is no effort at all.
Here pictured with a 12" Norwegian needle 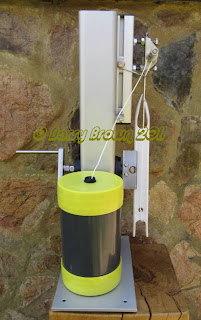 This netting stand is based on a design used by net makers on the island of Vinalhaven in Maine, U.S.A and is described in the book "Down East Netting" by Barbara M. Morton.
The stand is used for braiding (or knitting) small net items such as Lobster trap heads (entrances) and bait bags to go inside the traps.

The small box at the bottom of this stand has weights in it to stop the stand from being pulled over whilst pulling the knots tight, the top box is for holding spare needles and mesh sticks (Gauges).
The netter or group of netters would sit by the stand and work from a hook or in this case a steel rod at the top of the stand. 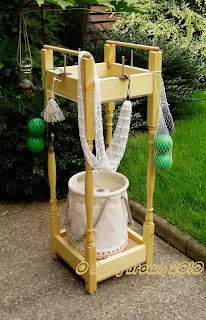 The Netting Stand in use.
Giving a Net Making work shop at the 25th Anniversary of the IGKT in Fareham 2007. 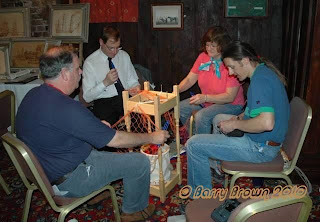