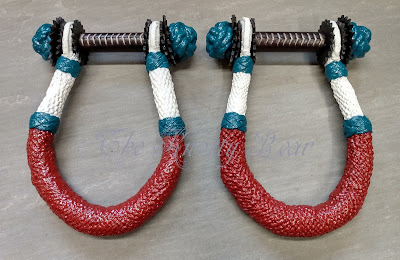 How Do All,
I was recently sent a pair of around about 140 year old antique sailors sea chest beckets for refurbishment.
This is something I have not done before, and had both beckets been in better condition I would have opted to preserve them rather than refurbish them.
The owners of the beckets also have the original chest and cleats which they have now refurbished themselves.
Both the chest and beckets still belong to descendants of the original owner. and they actually have lots of original paperwork giving the name and dates of the sailors birth, his travels, and also his passing; I think this is absolutely amazing that these have survived for over 140 years, are still together, and in the same family.
The Able-Bodied Seaman John Lewis was born in 1866.
You can see some pictures of the finished chest, and also some of the documentation shown at the end of this post, with kind permission of the owners. Thank you.
The chest and beckets had been covered in white gloss and other modern type paints over the years, and about thirty years ago the current owners had a go at removing the paint from one of the beckets, hence why the two look very different in the before pictures.
The chest, cleats and beckets.
Photo with kind permission of the owners. 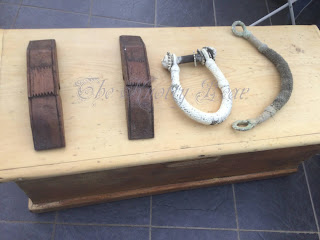 The beckets as I received them. 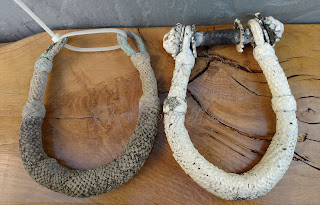 Lovely white gloss over everything. 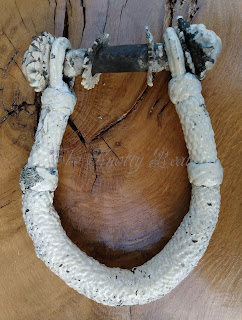 The other becket stripped bare. 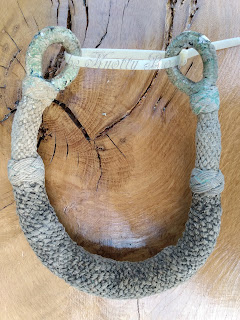 Upon examining the beckets for myself, I discovered that the remaining bolt rope had been chafed through to the iron core, and the rope and tarred marline under the fragile and chafed leather had all but rotted to dust.
The pinked leather washers on one side had been stretched and the holes enlarged, cracking and splitting the dry leather in the process.
Chafed to the bone so to speak, from use and the harsh marine environment no doubt. 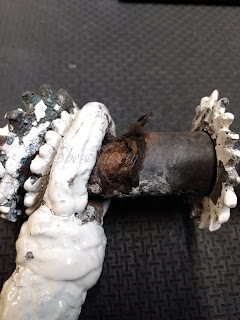 After the leather had been removed the end knots pretty much fell away of their own accord. 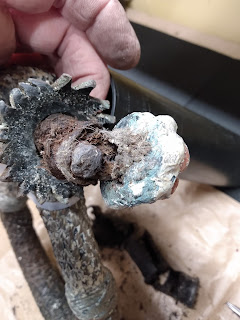 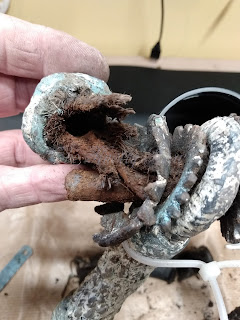 The six surviving pinked leather washers, the ones on the right had been enlarged by the becket legs pushing them outward and over the end knot of the bolt rope. 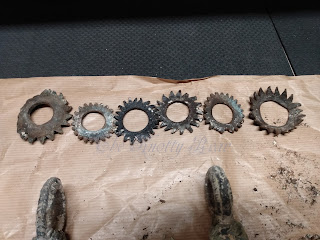 The perished remains of the surviving bolt rope, and one of the leather washers in the background. 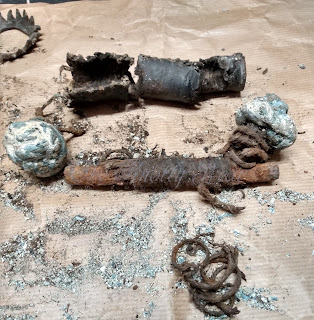 On the still painted becket I carefully removed the outer layers of paint (I actually spent several days with paint stripper, white spirit, and methylated spirit baths and an a tooth brush or two) revealing what remained of possibly the original finish.
The original finish appeared to be a dark red ochre/oxide colour over the tarred marline bails (central handle part), the legs and eyes where in white, and the Turk's-Head knots in a vaguely greenish blue, the manrope knots on the ends of the bolt rope appeared to be the same blue but with a possibly later added red central part.
This was as far as I was willing to strip the good becket, and I wanted to save as much of the remaining finish as possible, had both been like this, then a clear coat to preserve this state would have been my preference. 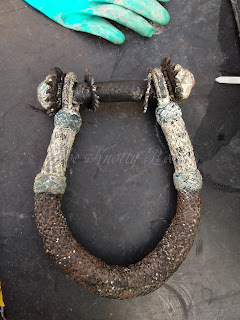 On the left you can see the original red ochre/oxide colour over the tarred cord. 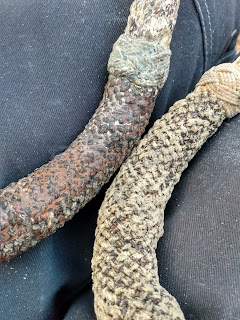 One of the end knots of the bolt rope showing the later? red centre, it looks as if the blue was painted over with white and then the red centre, but only the original owner/s would know for sure. 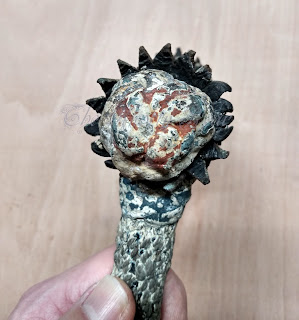 After soaking the misshaped becket for several hours I reshaped it as best as possible, but was not able to remove the lumps and bumps under the coving of the bail (handle part), and remaking the becket from scratch was not a viable or cost effective solution.
The reshaped becket on the left.
Also the makings of the new bolt ropes and a start on the pinked leather washers. 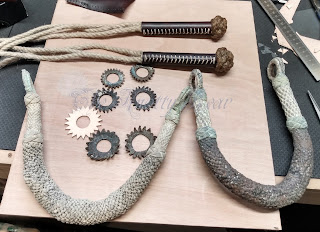 I made up two new bolt ropes from hemp rope over a rust-less steel core and, and made up twelve new pinked washers in 3 different sizes based closely on the originals.
Mocking up the new bolt ropes for size and looks. 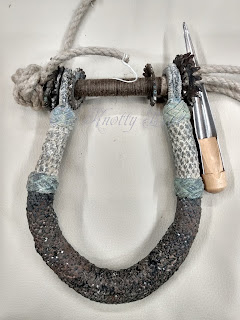 After several coats of shellac and primer paint I opted to paint the beckets in colours I thought complimentary to the originals though not an exact match. and the deep teal colour used on the knots was a request from the customer, and I think a good call as the blue colour I was looking at would not have looked half as good in my honest opinion. (the teal knots are actually more green in real life, they appear more blue in the pictures)
Freshly finished with optional cleat fixing hardware. 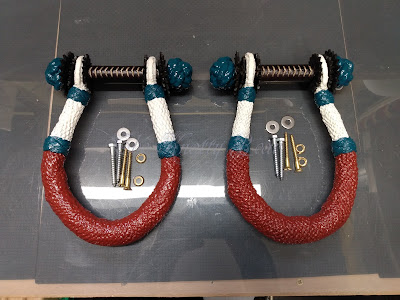 I was not able to make the pair physically match, as they started out in very different states of repair, also when originally made by the sailor they may have not been made simultaneously so have different thicknesses of material as well as physical proportions, I am however very happy with how they turned out.
The chest  and beckets back together again.
Photo with kind permission of the owners. 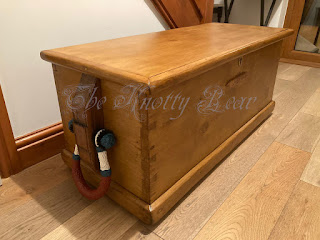 The chest belonged to able-bodied seaman John Lewis
Photo with kind permission of the owners. 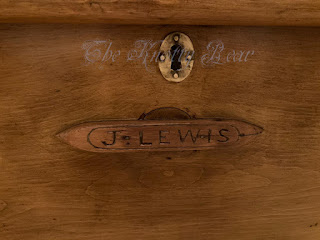 The opposite end of the chest.
Photo with kind permission of the owners. 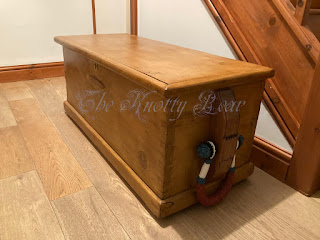 Certification of service aboard the Barque "Lota" from the vessels Master
Photo with kind permission of the owners. 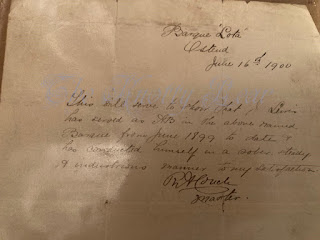 A telegram to Ann Lewis (wife) from the Barque "Lota"
I can only half read it at best.
Photo with kind permission of the owners. 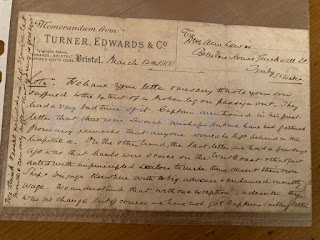 Certification of service aboard the vessel "Indian Empire" from the vessels Master.
Photo with kind permission of the owners. 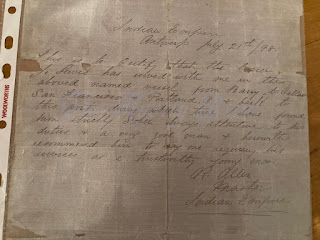 Thank you for looking,
Take care,
Barry / The Knotty Bear
Posted by Knotty Bear at 21:40 No comments: