New Cord Maker Modifications, And Adding A Core To A Cord

How Do All,
I was recently asked by a customer if I could add a central hook to the cord maker which I produce, and also a removable manual crank handle. 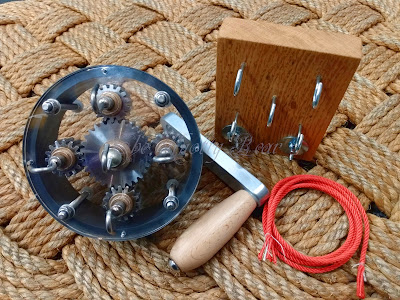 The reason for the central hook is that the customer would like to use the cord maker for making cords/rope with a central core, like shroud laid rope.
From the Oxford Reference:" The name given to rope laid up with four strands instead of the more usual three. The strands are laid up round a heart, or central, strand, as the four strands would not bind close enough together, and without a heart would leave a central hollow. Size for size, shroud-laid rope is not as strong as hawser-laid rope. However, it is less liable to stretch, and therefore proved more suitable to be used in sailing vessels as standing rigging."
And the reason for the manual crank handle is so that the machine can be used as a traditional cord maker, using a traveller and rope top for forming the strands into a cord/rope. Making a cord or rope with a core is not so easy in itself, and made in the traditional method the yarns would have been spun up into strands, and then the core positioned before the rope was laid up, the rope top having a central hole for the core strand to pass through.
Also due to the rope becoming shorter that the length of the strands as it laid up; the core would have to be managed by another set of hands.

My cord maker, and cord making method being completely different from the traditional means that the above method will not work as the cord forms from the centre out, all the time the drill spinning at high speed, so no space, and not safe for another set of hands to manage the core at either end! however my cordmaker can be used single handed to friends or helpers are entirely optional.

So, after trialling several different ways that I could possibly use my cord maker to make a cord or rope with a core strand I finally came up with the one thing that actually works.

I attached a ball bearing swivel to the central hook on the machine, this allows the machine and hooks to rotate as intended without the the central core being over twisted or untwisted, as either of these would effect the lay of the final cord and its integrity. 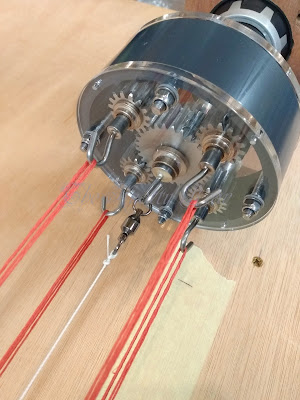 At the opposite end of the cord/rope walk sits the outend; which replaces the traveller as the cord maker itself travels instead, I added a central hook here also and the core passes over this and off the bench, the end of the core strand is weighted to take up the slack as the strands are initially spun up.

Below you can see the core strand exiting the formed cord. If you have any questions regarding making cords/rope with my cord maker, either with or without a core; please feel free to ask.
Take care,
Barry, The Knotty Bear
Posted by Knotty Bear at 20:17 No comments:

SOLD!
£230.00
Priced for a quick sale as Grahams eyesight has meant he can no longer cycle at all! 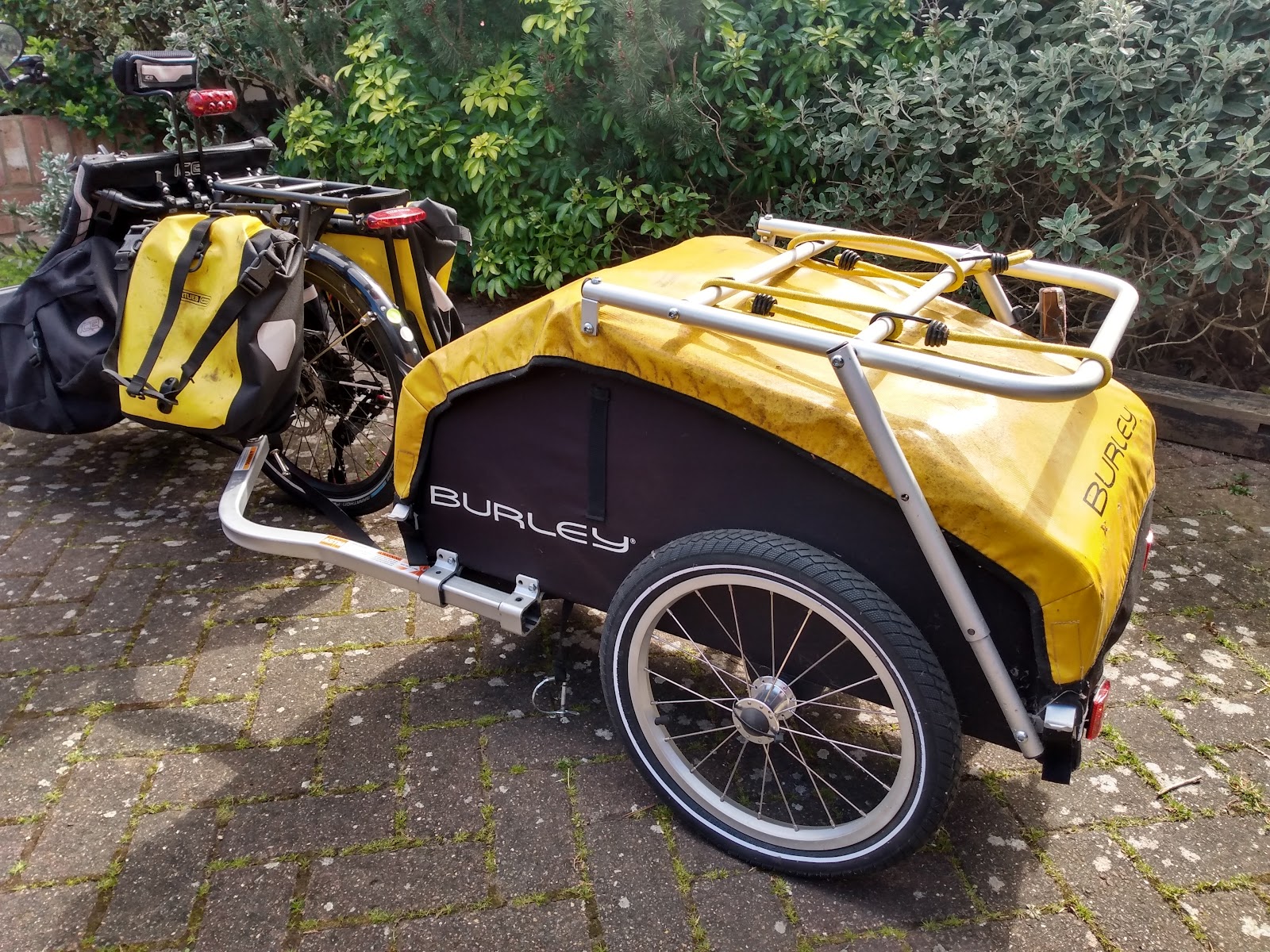 How Do All,
I am selling this Burley Nomad trailer with optional cargo rack for my friend Graham, he has had to give up cycling and touring now due to his eyesight.
The trailer comes with two arms to suit smaller and larger wheeled bikes. It has an optional cargo rack included also.
This trailer retails for RRP: £349.00 and the cargo Rack RRP: at £89.00 so this is quite a bargain to be had!
Please note: in our efforts to get pictures before the next snow flurry we put the wrong wheels on this trailer, the pictured wheels are from another trailer, but the proper Burley wheels with black rims will be sold with the trailer.
Graham is more than happy to have anyone come visit him and examine the Trailer. he is in the Hayes area Middlesex, just minutes away from the Hillingdon Cycle Circuit.
If you are interested in this item please contact me.
knotty dot bear at gmail dot com SOLD!
£230.00
Priced for a quick sale as Grahams eyesight has meant he can no longer cycle at all! 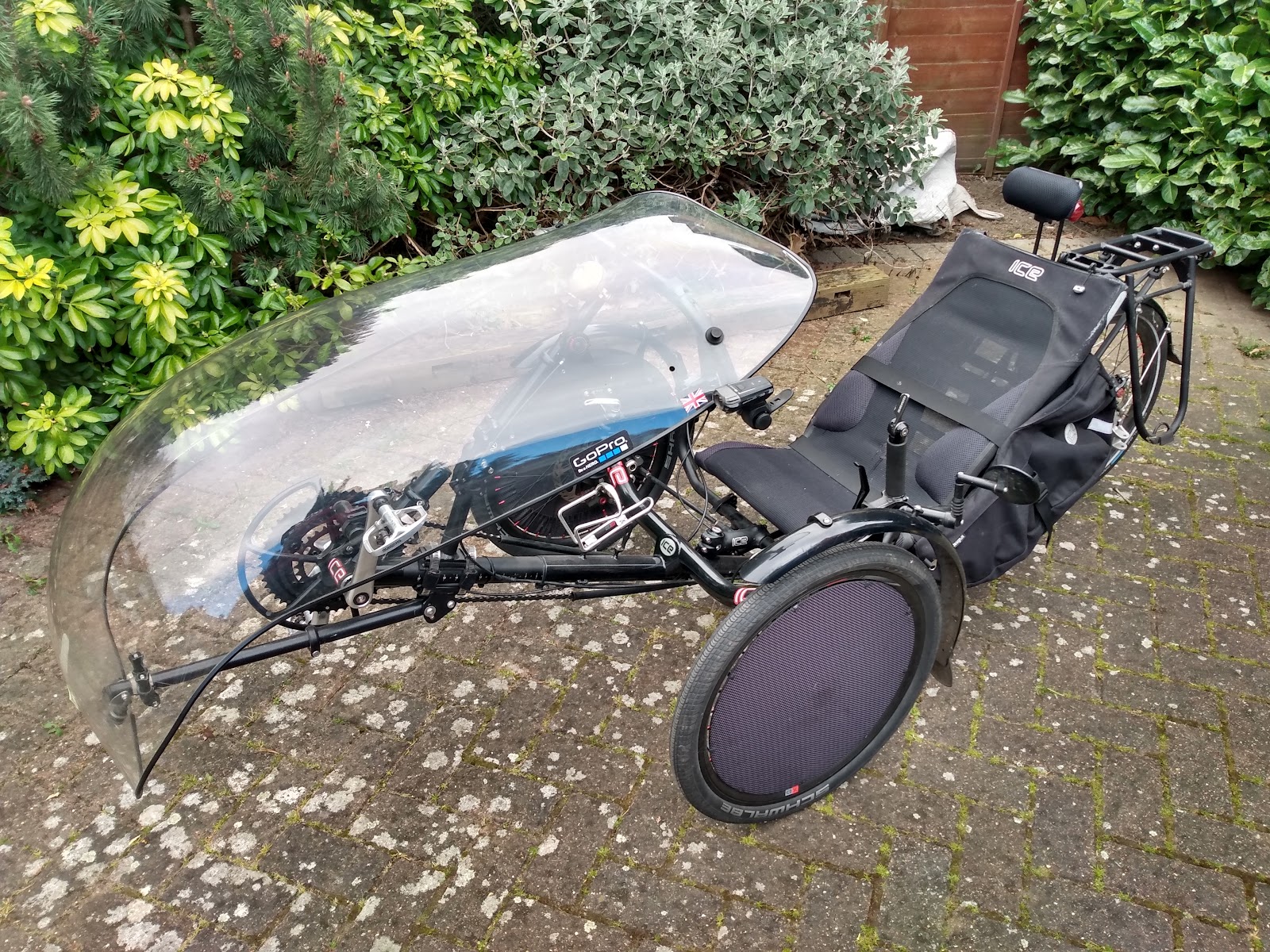 How Do All,
I am selling this lovely ICE Sprint FSX (full front and rear suspension) on behalf of my friend and world renowned author Graham Williams.
This is a great condition trike and needs no work or improvements, you can ride off into the sunset with no worries at all
If anything has been missed or you have any questions, please feel free to ask!
Please see all the honest pictures for a full 360 visual examination, and any extra details.
Graham is more than happy to have anyone come visit him and examine the Trike. he is in the Hayes area Middlesex, just minutes away from the Hillingdon Cycle Circuit.
If you are interested in this item please contact Graham directly: (remove the spaces from the email address!)
everyday 30 @ hotmail .com
Or myself at:
knotty dot bear at gmail dot com
The Details:
Inspired Cycle Engineering, Sprint X (FSX).
Please see pictures for extra details and points of interest!
ICE: ICE trike are packed with pioneering features and hours have been spent perfecting every detail. No corners are cut in the manufacture and assembly of every ICE trike. With ergonomically designed seat, ICE Road Response suspension, and the ICE Rider Positioning system, every ICE rider can be assured of a comfortable ride. ICE trikes have toured the world, proving exceptional reliability due to engineering integrity and depth of quality. Reliable, predictable, and assured, ICE trikes have renowned handling, stability, and efficiency, ensuring years of exhilaration and fun.
handling, stability, and efficiency, ensuring years of exhilaration and fun. The ICE Sprint folding trike is the ultimate fusion of sporting performance and long- distance comfort. With a mid-height seating position and ICE’s renowned handling the Sprint is a trike which begs to be explored.
This trike has been upgraded with the X-type package, optimizing it for speed performance with race specification components.
20″ wheel full suspension trike
ICE Compact Flat Twist folding frame
ICE front and rear Road Response
Suspension
Tektro Auriga hydraulic disk brakes
30 speed SRAM X9/TT500 shifters
Avid disc parking brake
Ink Black with red graphics
Wheels with Alex aero rims with
black spokes and red nipples.
Schwalbe Shredda tyres on the front
Schwalbe Marathon Plus on the rear.
Extras purchased by Graham:
X package a mentioned above
ICE over seat bags
There is a new seat cover to be included as the original one has a small area of damage to the mesh.
Bottle cage riser
New version head rest and rear light mount (light included)
New version flag mount on seat back
Front light mount
Full mudguard set with quick release front fittings
Ice mirror mounts and Mirrycle mirrors x 2
Front Windwrap fairing with light mounts, and Moon lights included
Fabric disc wheel covers
Front chain ring guard
Rear rack
A pair of Ortlieb pannier bags
Rear Rack light
Crane Ritten Bell (My personal favourite, Sounds Awesome!)
SPD pedals
There are also some brand new spares/extra tyres that will be included with the sale.
The Pictures:
Taken on 01/04/2022 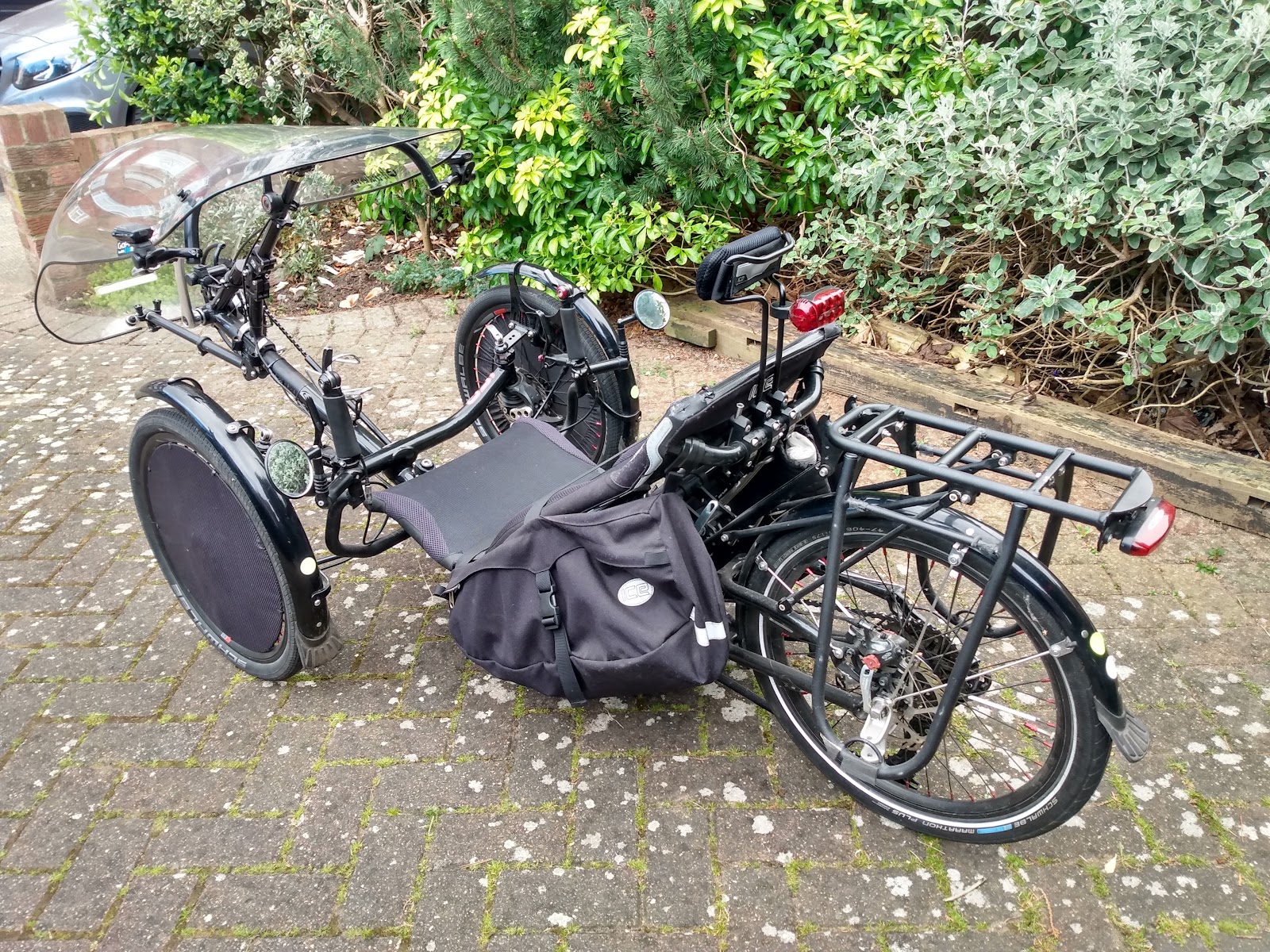 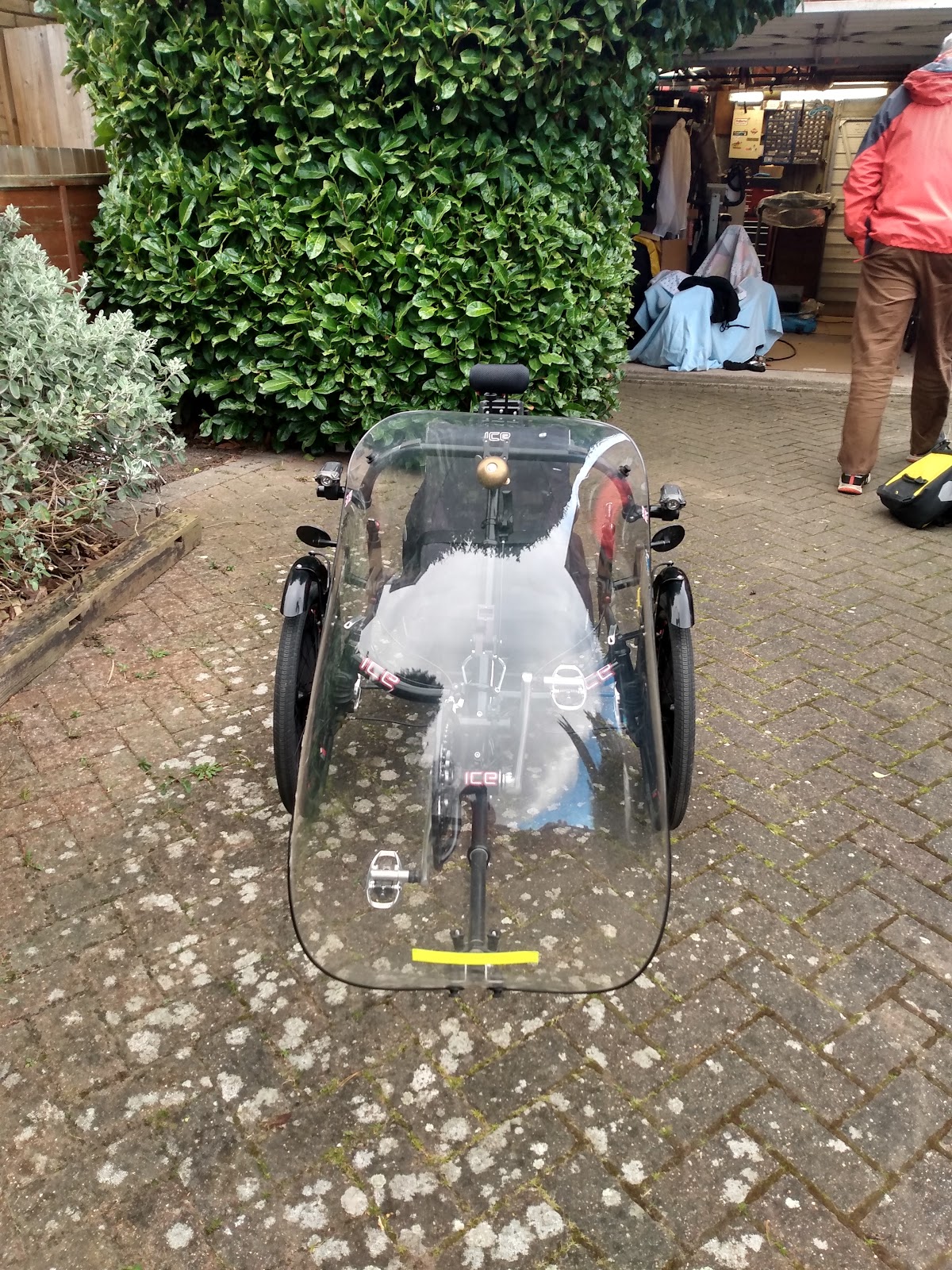 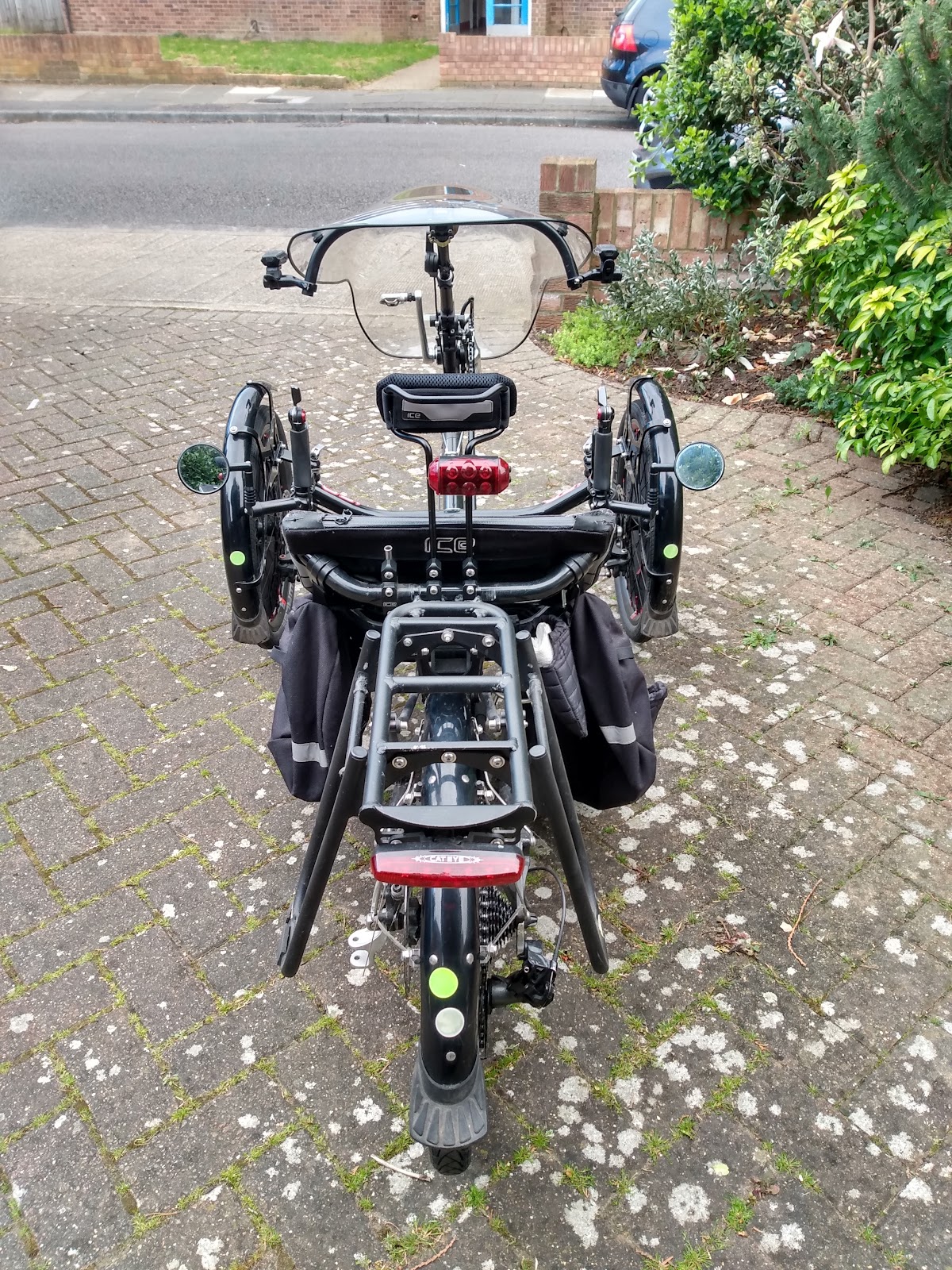 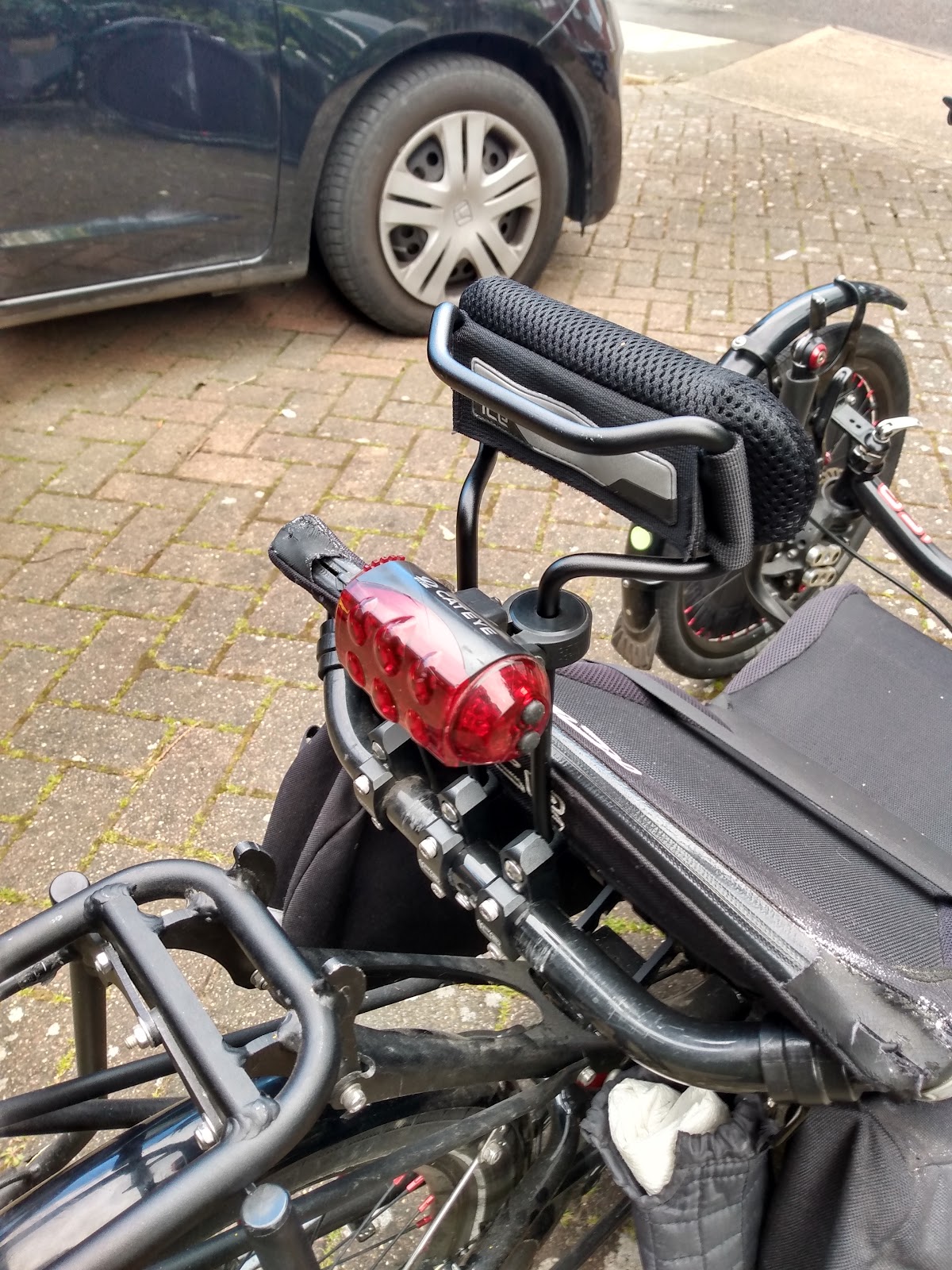 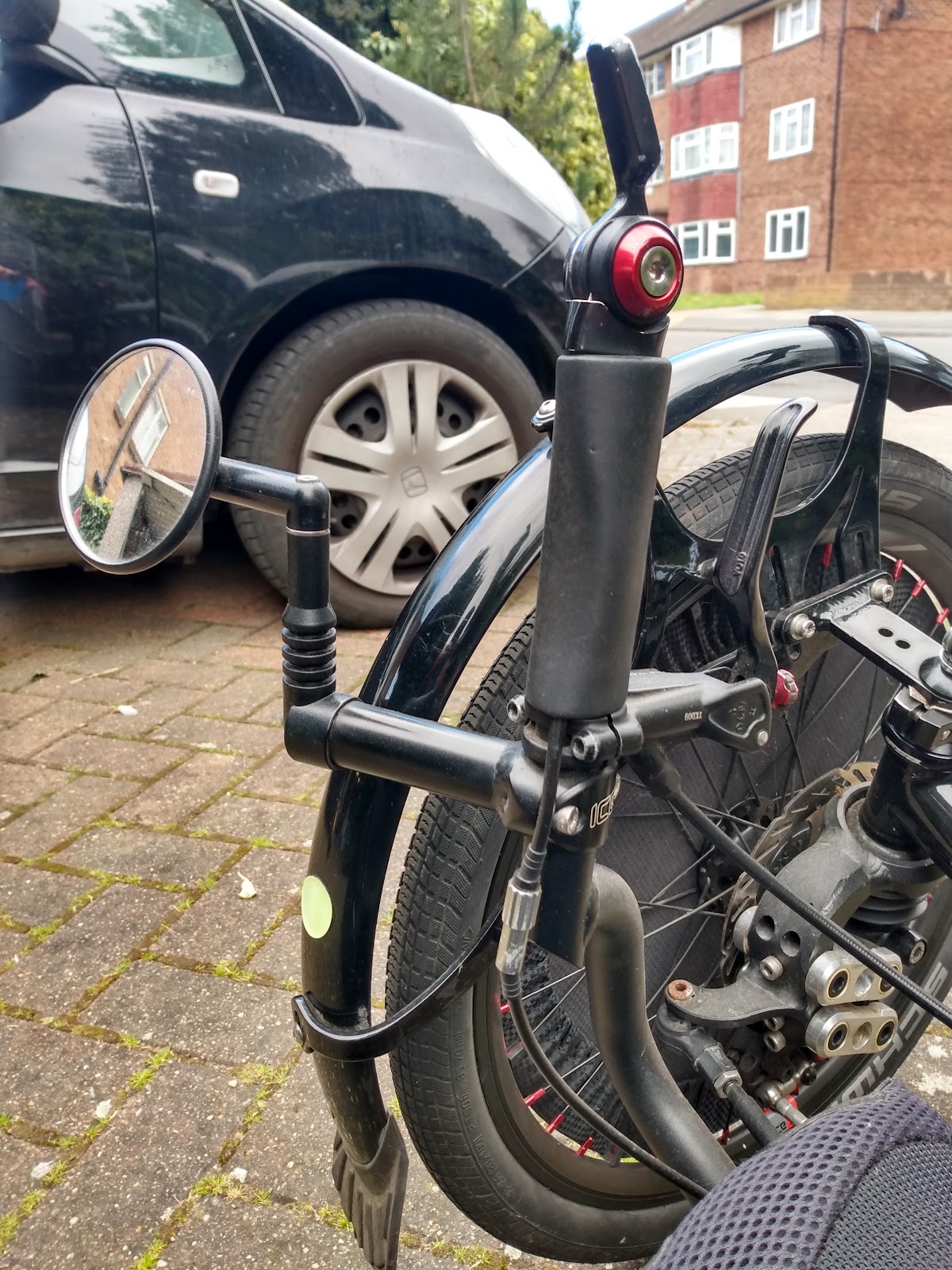 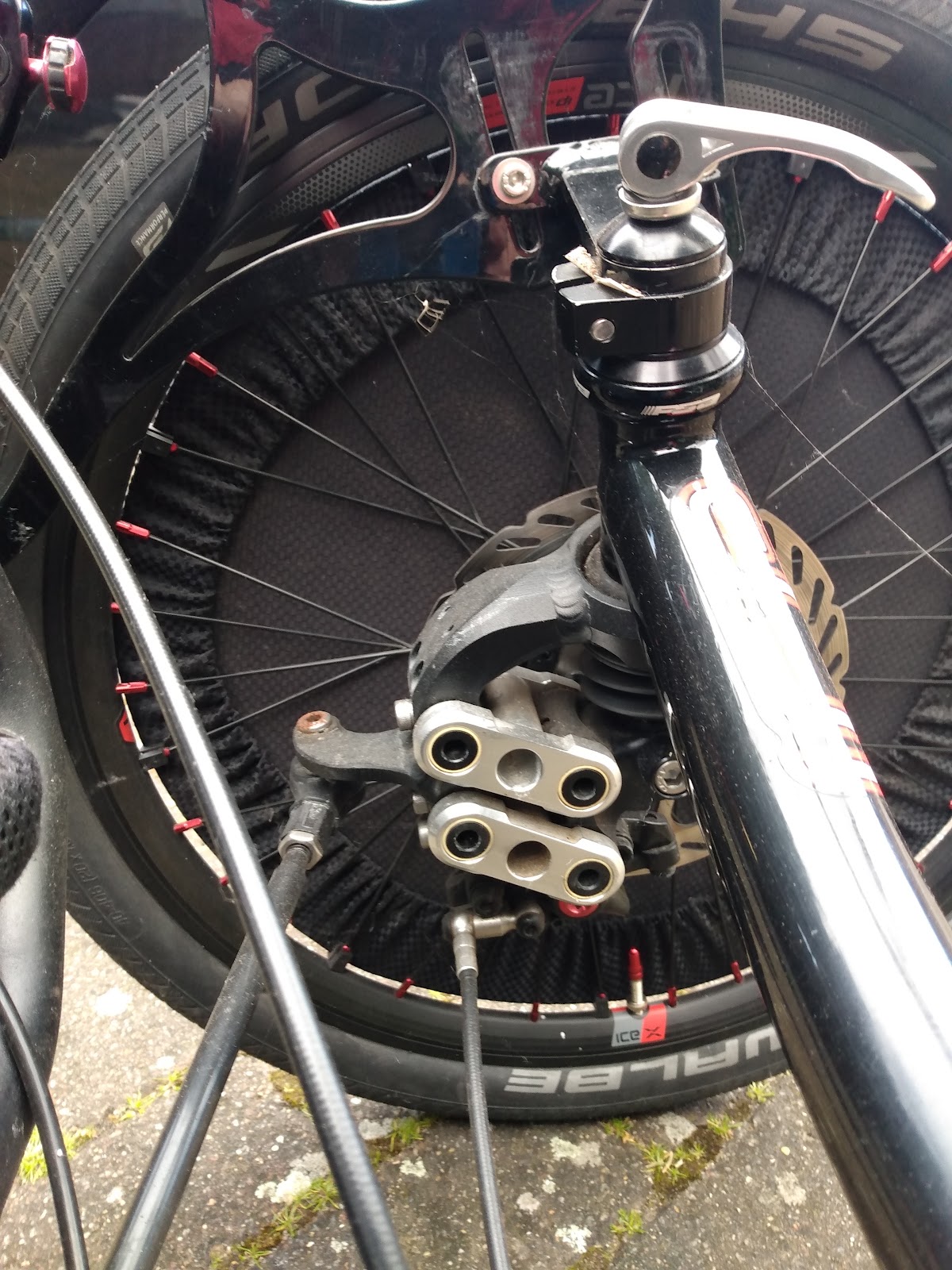 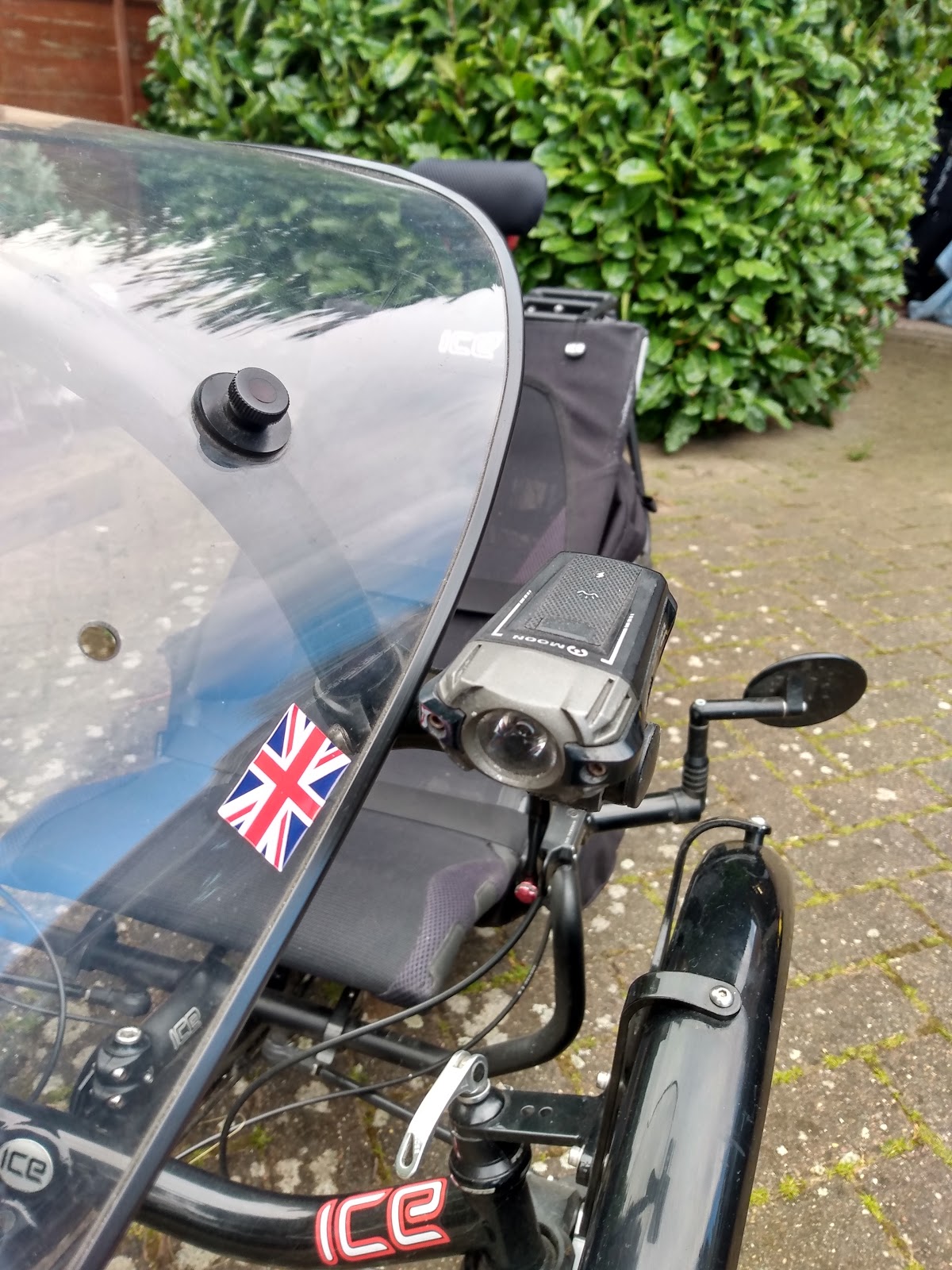 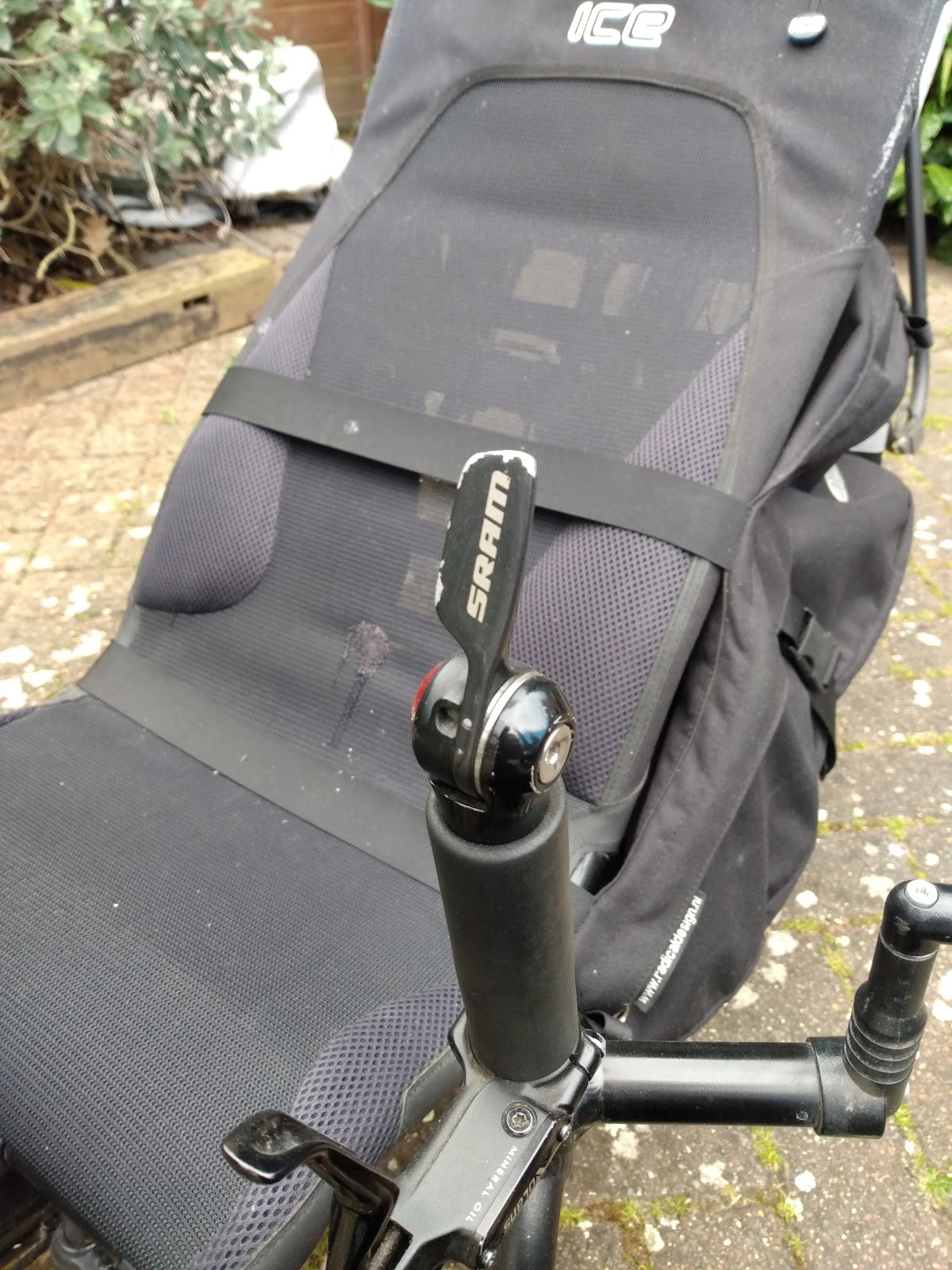 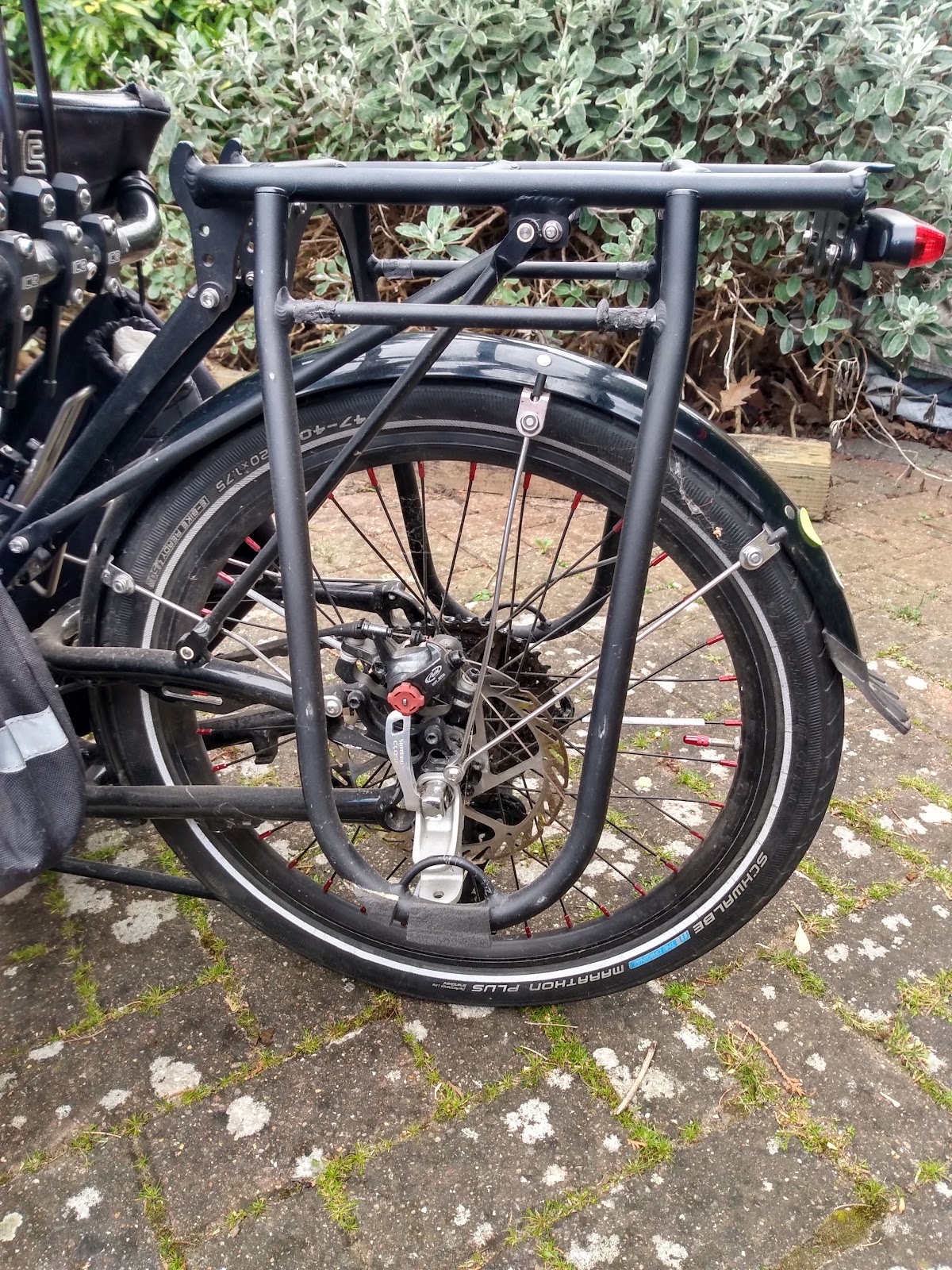 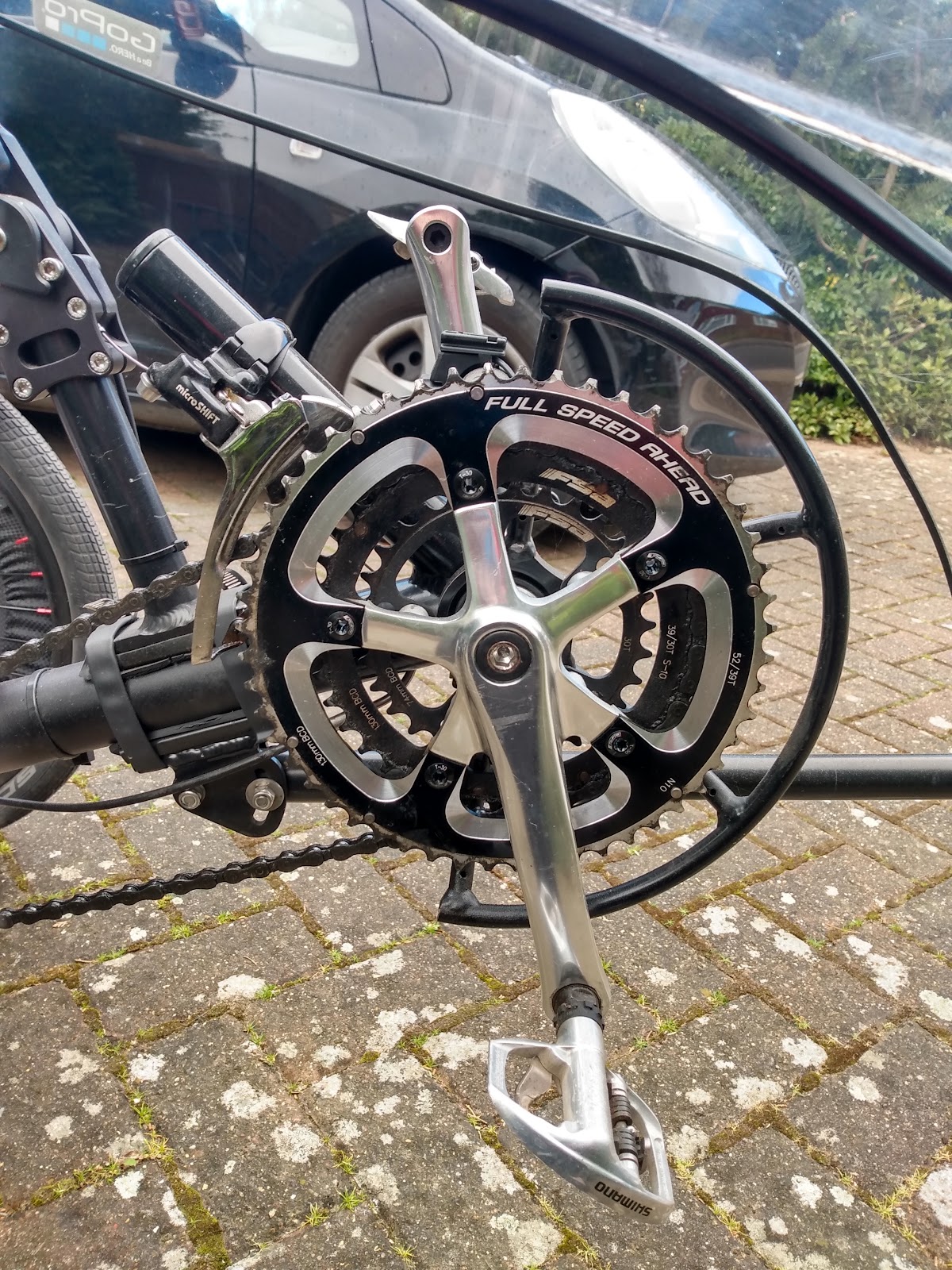 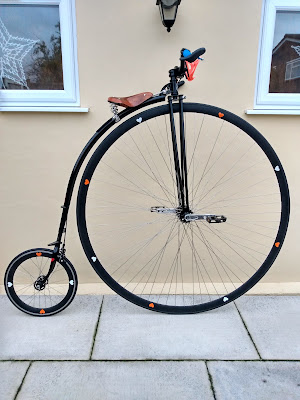 Here I offer for sale my Unicycle.com 52" Mk4 Penny Farthing, in Excellent condition! no damage at all!
(details of this bike can also be found here at the UDC website: Mk4 Penny Farthing )
I bought this High Wheel in September 2019 after winning the European Penny Farthing Championships in Belgium as a stand in for my bike which was damaged after the races.

I removed the seat post and fitted a SHW race saddle which is sprung and sits much lower on the back bone (frame) making it easier to use the pedals in the longest position which is great for hilly terrain.
The section of Velcro behind the saddle was to stop my saddle bag from rubbing the paint.

The bike originally had two upper steps opposite each other but this made mounting awkward for me as I kept hitting my shin on the upper right step, I removed this step (see pictures) I have the removed part which can be welded back on if you so desire.
The lower step is positional and you can adjust the height and angle of it, or if you have long legs you can remove it completely and mount traditionally with just one step.

The VCX+ cranks have three sets of pedal threads so you can change between 100mm, 125mm and 150mm crank lengths to suit your preference, whether you be racing, hill climbing or just out for a jolly.
The pedals are the original, brand new and unused platform pedals which came with the bike as I use SPD's
My leg length from the bit between my bits and the floor is 33" wearing trainers if that helps with sizing.

There is a Light mount fitted to take an Edelux or B+M light. please see pictures for example. I ran my light from a 7.4 volt Li-Poly battery pack.

As I used this bike for commuting during 2020 I added lots of my favourite reflective love hearts which looks awesome at night and really make you visible to cars. they can be peeled off if you prefer.

The handle bar is brand new as I fitted swept back race bars.
There is a rear brake.
The fork angle can be altered by sliding the rear fork in and out of the frame. This is a gorgeous Penny Farthing and needs no work or improvements, you can ride off into the sunset with no worries at all!

If anything has been missed or you have any questions, please feel free to ask!

I am more than happy to have anyone come visit me and examine the bike. I am in the Heathrow Villages area Hillingdon, Middlesex.
If you are interested in this item please contact me.
Sold!
The price I am is asking for this Penny Farthing is:
£1000.00
A Genuine near offer may be considered!
Thank you for looking!
Take care,
Barry ;-)
Posted by Knotty Bear at 17:54 No comments: