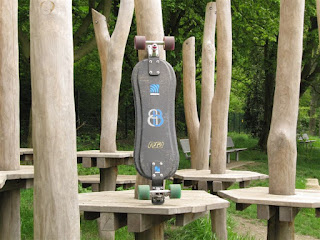 As mentioned in my last post, I said I was working on a new deck to go with the Siva Carbon Deck Brackets, well after much rushing and panicking to get the first prototype deck made before I went off to Germany, I just about managed by the skin of my teeth to get it off the mould cut and drilled with just hours to spare for the flight!

I did not take a spare deck with me and the Siva was completely untested, so if it turned out to be a bag of crap I would have been up Shit Creek without a paddle, though saying that the deck might have made a good paddle if nothing else ;-)

Initial bounce tests show it has some flex so not a solid plank, but needed to be ridden to see if it worked out right.

I set it up with a PSD Barrier footstop mounted via my Kick 2 Switch method so I can ride it Goofy or Regular without messing about. 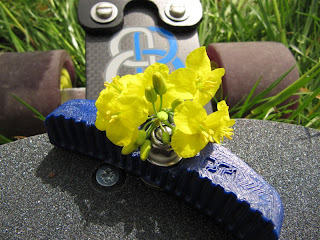 I put the Siva board to the test in Kettwig, Germany last week, and I am completely rocking this set up, the complete weight of the set up including Grip, Trucks and the like is 2948 grams, which is a great saving over my original Om set up which came in at 3802 grams, as a comparison, my Walkabout set up weighs in at 3828 grams. 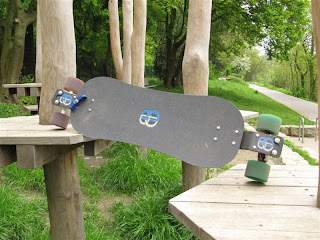 The Siva comprises of a multi layer foam core, laminated with wood reinforcements and carbon skins, the brackets are a solid composite of uni carbon, woven carbon and triaxial glass fiber, I could have used a foam or other materials as a core in the brackets to make them even lighter but this would have made the moulding more difficult so a few layers of triaxial glass interspersed between the carbon gives a little extra thickness at the cost of a little extra weight, (only a few grams in reality)
My goal was not to make a super feather weight board, but a stiffer and slightly lighter board than my Om. 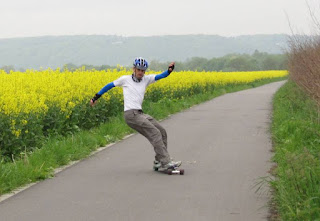 The deck has a little camber about 3mm and a really nice comfortable concave at about 8mm across the widest part of the deck.
The deck is just a tad over 10 inches wide as I wanted as much foot contact with the deck as possible and made the rear of the deck the same width to give the same area for the rear foot instead of narrowing the deck towards the rear as seems to be the norm.
There is just a little flex in the deck as I wanted the ride to feel very direct without the truck angles changing too much in deep hard pumps, as I found this to be a problem on the Om set up, maybe a little more flex would be preferable for some people, and I will make another deck as a comparison later.

I kept the 840mm wheel center to wheel center length the same as my Walkabout and Om set ups as this really suits me and my truck set up.

The deck is set up with a 5.0 Vector front at about +20 degrees with pink Reflex bushings and the rear is a 130mm seismic stable, with Red/Light springs at about -7   degrees.
77mm Seismic speedvents and Tekton bearings.

I bought a roll of grip tape at the Subvert skate store in Hamburg and just applied it simply to the whole deck with only a cut out for the BB deck top logo which I think looks pretty neat   and was much less work than trying to cut some fancy design it, I think I learnt my lesson after cutting the Namaste name in the grip on Victoria's board. 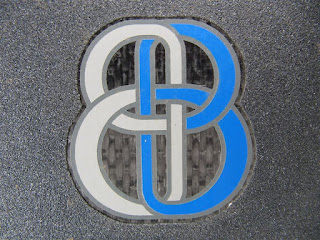 I tested the board over several days along a 10.8 km section of the River Ruhr between Kettwig and Mülheim, The pavement is immaculate on the whole, only gettign a little rough near Mülheim and the closest thing to skate Nirvana I have ever had the pleasure to play on! 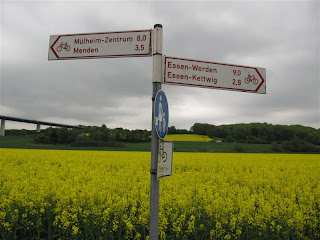 The first day I went out I skated just over 8km before the heavens opened and I was forced to take shelter before until the rain stopped just long enough to get to a bus stop on the main road near Mülheim I then had to sit for 25 minutes through an onslaught of forked lightning, thunder and heavy rain

the following day the weather was fantastic and I was able to skate to Mülheim and back twice over, making up nearly 40km before tea time.

Siva Performed fantastically, with a very direct, solid and stable feel it was a joy to ride and I could have skated to Mülheim and back again given more time ;-)

The Kick 2 Switch footstop  mounting works like a dream also and switching from Goofy to Regular is no hassle as the footstop will move to whatever angle your foot needs it at, so is very comfortable and easy to use.

I was also able to try out my adjustable carry sling making it easy to carry the board around town hands free after a Stoke Fest of a day! 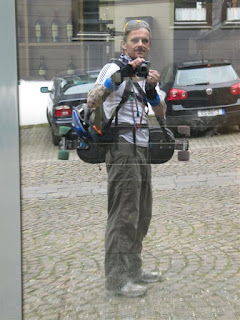 I Also got to skate with my girlfriend Victoria, which was really cool as there is nothing like skating with good company. 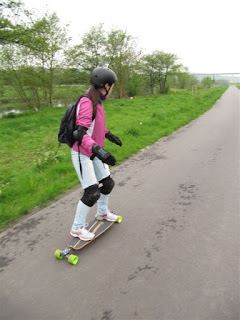 We skated along the Ruhr and I was able to try out her Namaste, now set up with a pair of the Siva Carbon deck brackets also, and this rides really great also and nice to try the brackets with an RTS rear truck as a comparison to the Seismic stable on my board, the RTS has a much more carvy and fun feel at the same angle compared to the more direct less carvy feel of the Sesmic. so I am thinking of using an RTS again on my Om as a fun town board. 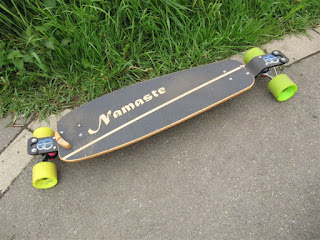 Extra photos and video below.

Some more Photos from skating along the River Ruhr, Kettwig, Essen, Germany (captioned)


A stabilized version of the above video, not sure if it is any better mind! :?

A very short clip of me riding the Siva, filmed by Victoria.