Heading In The Right Direction (steering) 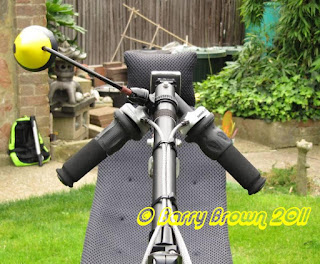 The past couple of months or so; I have been trying to put together the perfect steering system for my High Racer, and also try out a few modified items with the view of using similar on my new Carbon Low Racer. 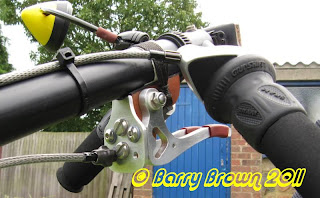 The aim was to make the bars as narrow as possible; with as clean as possible lead for the cables.
Previously I had been using Avid Elixir carbon; hydraulic disks, with flat bar mount Shimano thumb shifters, this made for quite a mess of cables and hoses; as each had loop back on it's self to get everything in as narrow a space as was possible.
The two pictures below show how the steering was before the major surgery, wide, messy and a pain to change gear in when in a sticky spot, the hydraulic brakes were fantastic though ;-) 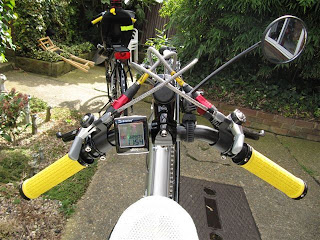 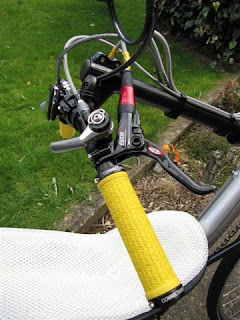 And below are several views of the new, improved steering system.
As you can see there are no large loops of cable or hose to restrict the view,  and the bars are now directly mounted into the steering mast, getting rid of the nasty looking angled stem and which had the bars mounted a couple of inches below the mast.
The computer is mounted centrally behind the mast top and is easily read without being stuck in the way of the hands; or perched on top of the mast where it might restrict the view. 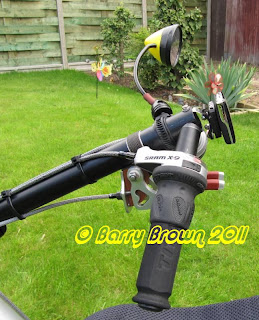 I have modified the grip shift, gear shifters so that the cables have a fair lead coming straight out in front of the bars and are directed cleanly in to, and down the mast, a bit of work to do this but worth the extra effort, and also reduces the friction on the cables as two bends; otherwise needed have been avoided. this also means the bars can be much narrower and therefore more aerodynamic. 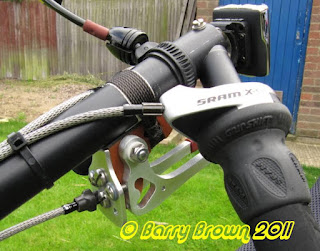 You can also see that I have lost the standard brake lever set up, and have made a nice alternative thumb lever set up under the mast.
The main part of this is cut from Tufnol; and rather than attaching the block with a jubilee clip or similar; I decided to attach it with a lashing of tarred Marline; Sailor fashion this has proved slip proof and looks neat.
the levers themselves are cut from Aluminium Alloy; and the cable can be routed to increase or decrease the amount of cable actuation from the levers, I am only running a front disk brake at the moment, without any rear brake,  but this has proved to be more than ample, even managing a really cool endo during an emergency stop ;-) so plenty of stopping power.
Again I built the lever set up to have as clean and straight as possible lead in to and down the mast, thus creating less friction on the cables, keeping the cables as short as is possible and very aerodynamic as the whole brake lever set up sits behind the mast.

I also made a nifty little mirror fairing using a chopped up, ABS prop spinner from a  model aircraft, just need to make a nice aero stem to go with it now. 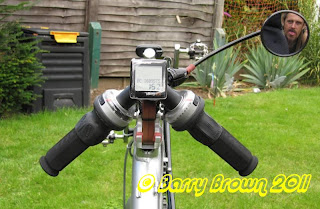 And how does it perform?
Fantastic is the answer!

I got my first real test of the system back in October racing with the BHPC at the Hillingdon Cycle Circuit, and was really stoked at just how comfortable and intuitive everything felt, nice and compact, not having to move my hands or remove my finger or thumb to change gears making changing gear in the middle of the bomb hole hairpin at 31mph no stress at all.
I was really chuffed to come first place in my cycle class in both races that day; so was super happy both for me and for all the modifications I made to the bike which all seemed to work perfectly.

I would never go back to thumbie shifters or rapid fire trigger shifters now, on any bike! and the Cable actuated BB7 disk brakes perform just as well as the hydraulic version I had before; but with a much cleaner look, and no longer needing to bother with bleeding the brakes or replacing expensive hoses if they get damaged. the BB7's were a joy to install and have worked thus far without need to tweak anything.

The only problem I had with the brakes was forgetting where the levers were when  coming home after the first test ride and just missing the front wall by millimeters when entering the drive way, I was trying to grab at the old finger levers wondering where they had gone, luckily I found the new levers before hitting the garage door ;-)