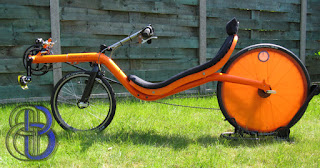 I managed to get hold of quite a nice Challenge Fujin SL at the end of January, the bike was third hand and had a few issues, but the frame was in pretty much mint condition, which was the most important thing for me as everything else would be Barryfied in one way or another ;-)

Below is a picture of the bike as I bought it. 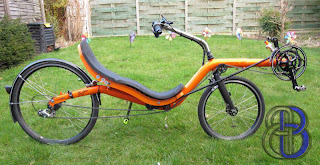 This is a 2006 model Fujin SL1 with Carbon fork and Titanium, fixed tiller steerer.
The few problems with the bike were minor in my opinion and very easy to fix, the main one being the seat which had a kink in the supporting structure, possibly caused by someone sitting on the back of the seat when getting in or out of the cockpit as the bike is low and with the fixed tiller this is an easy thing to end up doing.
You can see the damaged area and the temporary fix that someone had tried to do by bolting a piece of flimsy alloy angle to the back of the seat frame which was deformed to the shape of the kink :-/
I got rid of the offending piece of alloy and straightened the seat frame back into shape, the seat now being straight and not needing any extra help to keep it that way. I also decided not to paint or try to hide the battle scar as matching the paint is nigh on impossible. 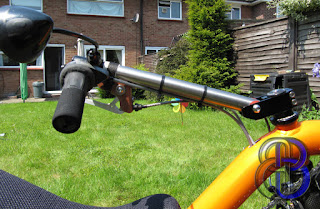 The new seat saver, Flip Up tiller arrangement!
The next item on my to do list was the fixed tiller steering arrangement, and probable cause of the seat damage.
I cut the Titanium tiller down, removing the ugly bend and screw headset adjuster, I added a Nylatron plug to the base of the Titanium tube, profiled the end and fitted it to my spare flip up headset from my Highracer. 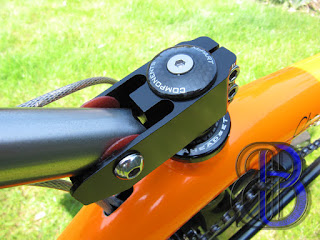 I added a Carbon Top cap and placed small polyethylene disks to either side of the pivot point on the flip up headset, this creates friction, holding the tiller where you leave it, and also protects the parts from abrasion during use. 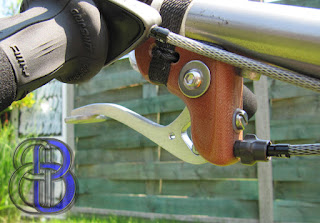 Next up, I ditched the standard brake levers and also the rear brake completely, a rear brake on some recumbents can be dangerous, also not needed on a race bike, and is also a personal preference.
I the set about making a new underslung brake lever for the front brake which as well as being more aerodynamic than reindeer antlers, can be operated by either hand, which when riding to the track on the road is handy when indicating and trying to brake at the same time.
The brake lever consists of an aluminum lever mounted into a composite Tufnol block, and is attached to the tiller in a rather salty dog style with a lashing, I had to get some rope work on the bike somewhere ;-)
The Brake lever also has an enlarged thumb pad to save the lever biting into the thumb when braking hard, this was sometimes a problem on my high racer with prolonged use. 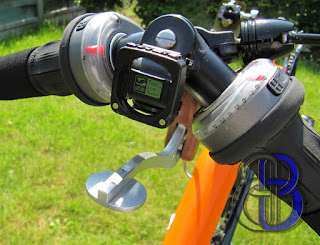 Detail of the controls.
Getting rid of the brake levers also means the modified Sram grip shifters can be brought closer together, again more aero. I made a computer mount from a piece of heat moulded plastic which plugs into the end of the tiller stem.


Next, the drive chain. 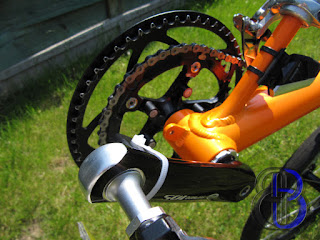 I started by shortening the 165mm cranks to 140mm, which is my preferred length, you can see more info about crank shortening in an earlier post here: Short & Cranky 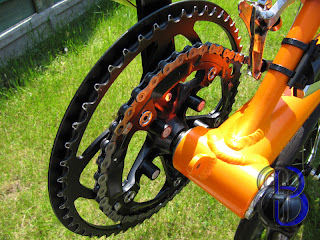 The original Shimano 105 chainset was a  triple ring set, but as the inner ring was unnecessary I
removed it making this into a double chainset, I also plugged the screw posts for the small ring with little plastic caps, I may cut the posts off in the future. 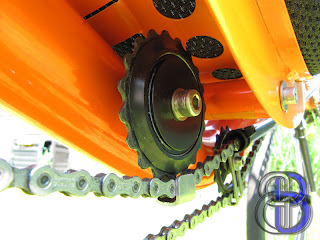 The power and return idlers had a few issues also.
The power idler was mounted on a frame post which came out so far that the chain line was pushed beyond the outer edge of the smallest ring on the cassette, so I cut the post down, shortened the fixing bolt and also reshaped the stainless chain keeper to better do its job of stopping the chain leaving the idler and chewing on the seat mounting post. 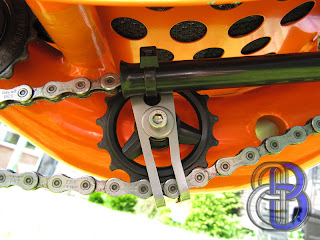 I mounted the chain keeper for the bottom return side idler the opposite way around to how it came, and also reshaped this to work properly as originally its profile was so wide that it allowed the chain to leave the idler, not a problem now!
The last issue in this area was the chain tube retaining rod, originally silver soldered to the power idler chain keeper, this came broken and was crudely zip tied to hold it in place. I got rid of the retaining rod and instead mounted the chain tube to the return idler with a single nylon zip tie, which places the tube in the correct alignment for the chain coming from the power idler. 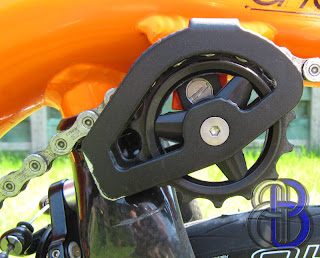 The upper return idler also had a little issue  with the chain keeper / cage, the alignment tab on top of this had been slightly deformed (crash damage maybe from the look of it) making the parts able to swivel, which must have been the cause of the scratching on the fork also, this has now been straightened, solidly fixed and runs smoothly. 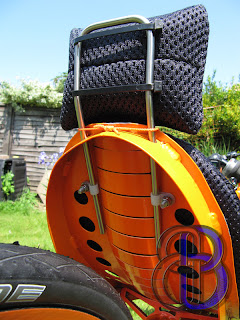 There was no head or neck rest on the seat, so I made a frame from 6mm od SS tubing fixed by two small nylon P clips and stainless hardware, the tubing mounts through two holes drilled in the seat frame, and can also be adjusted up or down quite easily. the pillow is made from 2 types of air mesh material and is held in place with two simple zip ties which makes for quick removal, sliding it on and off the tubular headrest frame.
I also made the seat pad from the same materials as the pillow and this is fixed to the seat using small areas of Velcro and also some beads of a kind of silicone sealant which stops the seat pad sliding on the seat making for a direct and very connected feel to the seat. more on this some other time maybe ;-) 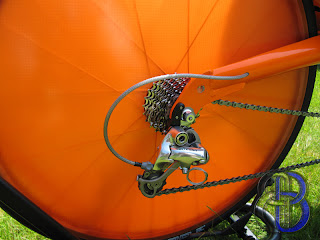 I changed all the gear and brake cables, and changed the rear 11/23 cassette out to a 12/25 cassette which is much nicer to use in conjunction with the 140mm cranks, and also the larger 55t front ring.

Just for my own piece of mind, I dismantled both wheels and completely rebuilt them, and added new rim tape, tubes and Durano race tyres, and also cleaned and lubed all the bearings.
the next step was the long process of skinning the rear wheel with nylon fabric, this is bonded to the braking surface of the rim and then shrunk using shrinking nitrocellulose dope and other secret ingredients and coatings, more on this some other time maybe ;-)

the next step is to build a mono blade for the front end, for which I have already built a new front wheel, this wheel will also be skinned in the same Jaffa Orange fabric, after that a carbon fiber seat is on the cards also when I get around to making the mould.

This and the very top picture is how the bike looks at the moment. 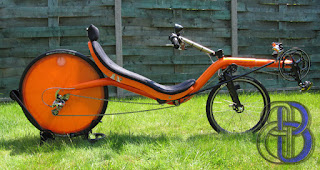 I really love this bike and it is so easy to handle, at under 10kg it is very light and pretty darn fast, I think its a keeper. I have spent quite a lot of time in the mornings riding at the track and around the borough and I can't get enough of it! The silver high racer has now been relegated to commuter work bike ;-/ 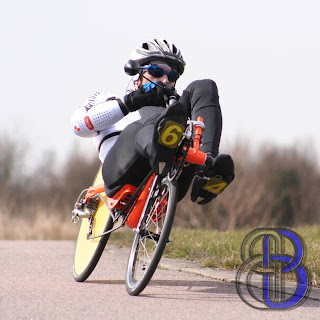 My first and only race outing on the bike so far this year, where we both performed better than expected, taking the overall win for the unfaired class on the day. I was very happy with that considering I was still recovering from an operation several weeks prior.
Photos taken at Hillingdon cycle track by Jonathan W 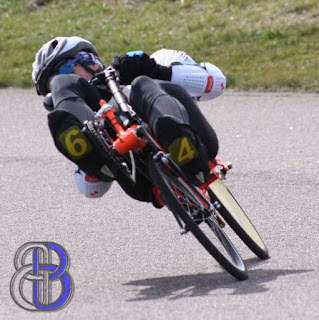 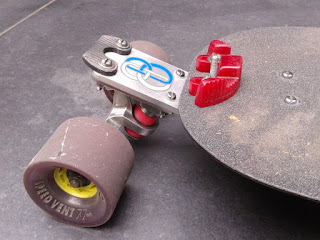 Designed by Tim at Pritchard Skate Designs in the UK and manufactured by RipTide Sports in the U.S., the OUT-Side Convex Footstop is made of a resilient 65d (105a) Urethane. Not only does the Urethane make the FootStop extra durable, it allows it to mold to the shape of your deck.

The material reminds me of a Maynard's Wine Gum, but tastes no where near as good ;-) 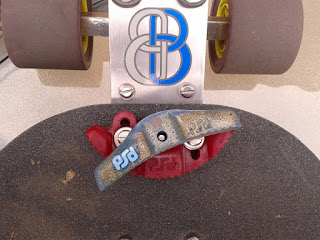 Just for comparison, the Outside with my modified PSD FWD to Barrier footstop on top,

The Outside is super light, will conform to the concave of your deck and is simple to fix using the existing truck mounting holes and slightly longer screws, takes but a few minutes to get one of these puppies on your deck, so no excuses for not having one!

You can adjust the footstop 20mm back and forth so you can dial in that sweet spot, sadly due to my Kick 2 Switch mounting post I was not able to positing it as far forward as I would have liked.

The idea of the Outside is that you can ride with you foot at any angle due to the wide radius of the face, this also makes riding both regular or goofy possible without having to move the footstop as you might have to do with a concave fixed footstop like the "Inside" this is also good if you share your board with a friend that is opposite footed to you.

I took the outside for a test ride on my Carbon Siva and headed off for a 17 mile / 27 km around Heathrow and the surrounding villages before heading off to work, Oh' the joy of only working afternoons ;-) 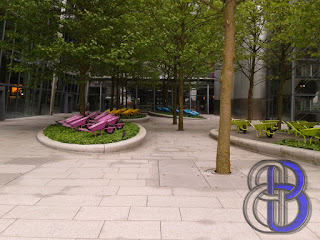 One of my favorite stops on the route is the Secret Garden (my name for it any way) at T5 Heathrow which this year is sporting a range of bright coloured wheelbarrows planted amongst the trees, looks like they are trying to take off!
Nice and out of the way of the main forecourt, with trees and raised beds to pump around I was able to spend some time pumping in circles and figure eights, both goofy and regular. 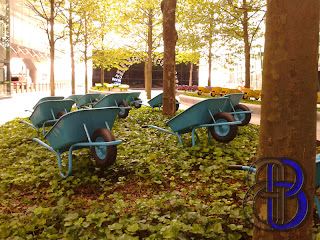 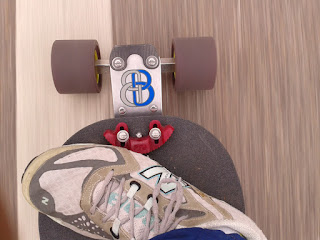 The outside has a nice grippy feel which locks your foot into place due to the deep moulded grooves in the face, this really helps to stop your foot migrating towards to edge of the deck and you need not worry anymore about foot wheel bite, which can be a nasty sudden stopping affair and a face full of pavement ;-) 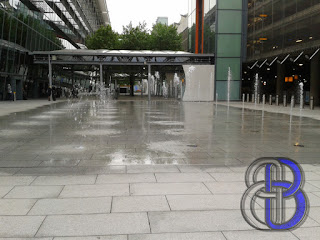 A complete waste of good LDP space, the other T5 pump playground with water fountains, that's the first time I have seen them working, and though very nice to watch the show I would rather riding on a nice dry surface ;-)

In conclusion: if you like to pump switch or want to try pumping switch, just like to move your foot around a lot whilst riding or like to share your deck with anyone else that might be goofy or regular then this could be the footstop for you!
I personally prefer the feel of the concave face on the Barrier or FWD, now the new "Inside" as this gives a much larger contact area to me foot which I like. but even after 17 miles the outside caused me no pressure pain, like a small diameter busing can do, especially with sift shoes on.

as I have said before: You can't go wrong with one of these puppies on your board!