A few weeks ago I found a Shekere in a charity shop in Eton whilst out shopping in Windsor.
It was pretty grubby and the netting was a nice shade of nicotine and coffee brown, with the long ends of the net hanging in a frayed mess, urgh!
But as I am interested in all things to do with net making, no matter how tatty looking I had to have it for interests sake.
I only paid £2.00 for this item so in any state it was a real bargain.
(note: all pictures are of the refurbished Shekere, as I forgot to photograph it in its original state) 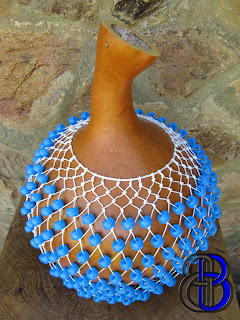 I took off the beaded skirt and soaked it in a concentrated stain remover for a few hours and then poured off the almost black liquid. I then soaked it over night in a strong biological washing liquid solution and gave it a  thorough rinsing.
The net came out a bright white just like new, and the beads also looked just like new. 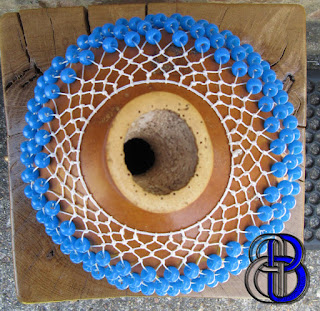 I scrubbed the Gourd body with a mildly abrasive but non scratch citrus cleaner and the Gourd turned from a coffee stained brown to a nice orange brown colour. I also sanded the top of the opening smooth and straight as this had just been left ragged by the maker. 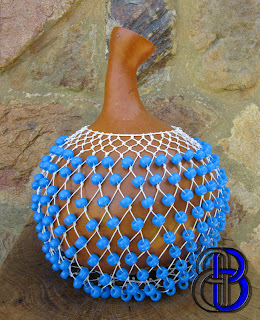 There was a marble stuffed into the top of the opening which took an age and some ingenuity to remove without damaging the neck of the Gourd, and then also some loose debris inside which was left from the the Gourd not being cleaned out was removed.
It was amazing what a difference this made to the tone and resonance of the gourd which was actually quite good for its 8" diameter and small opening. 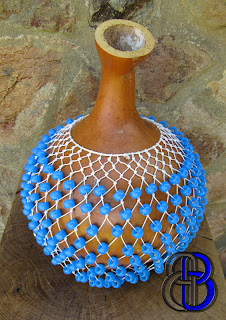 I polished the Gourd body with a quality wax polish, though I could have also oiled it with Danish oil or similar, some people use a Polyurethane coating on the outside but I think it looks too unnatural and plastic, just like the beads, but they seem to be the best thing for the job. 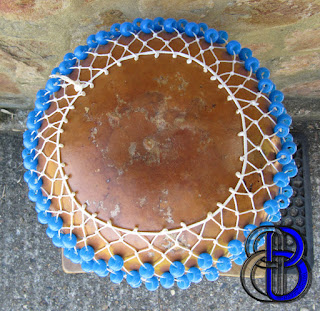 I replaced the netting, and decided to finish the bottom of the net off with an extra row of meshes and an adjustable cord rather than the long tail of knotted cords as was original, the tone of the gourd seemed to be dampened with the long tails when hitting the bottom with the heal of the hand, you can use either method and each has a slightly different playing style.
I could have completely replaced the net with my own but for the sake of it the original net was fine, if a little unevenly tied in a coupe of places, and for £2.00 I am not complaining as I have a nice little instrument now, which also sounds pretty good for its size.

How Do Barbara ;-)
Thank you for your comment. One note is hat this item isn't just a pot, but a traditional musical instrument.
Take care,
Barry ;-)